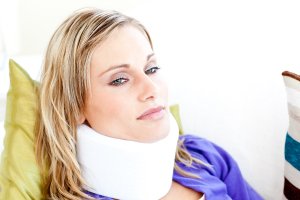 One of the most common reasons why individuals visit an accident lawyer in Baltimore is to recover compensation for car crash injuries such as whiplash. Whiplash most commonly develops after a rear-end collision. This injury refers to damage of the soft tissues of the neck, which include the muscles, ligaments, and tendons. Whiplash symptoms may be mild or quite severe, and some car crash victims may require extensive rehabilitation. If you’ve been diagnosed with whiplash or other injuries after a collision, a car accident attorney can help you recover compensation for your losses.

As soon as a car is rear ended, it is propelled forward abruptly. Within a matter of milliseconds, the acceleration of the car seat forces the torso of the driver forward, followed quickly by the lower neck. However, the head is rotated and is forced backward, which results in hyperextension of the neck tissues . Following this, the head is then abruptly forced forward, which hyperextends the neck. When the neck is hyperextended, the muscles, ligaments, and tendons are forced to stretch beyond their normal capacity, causing tiny tears in the tissues.

Which Symptoms to Watch Out For

Whiplash is unlike most car crash injuries in that the symptoms may not be immediately apparent to victims. Sometimes, a car crash victim will contact the insurance company to file a claim only to find later that he or she has suffered injuries and requires medical treatment. This is why it’s best to work with a car accident attorney in Baltimore right away and to keep your lawyer apprised of all symptoms. The typical symptoms of whiplash include neck pain and stiffness, loss of range of motion, headaches, and dizziness, which may lead to nausea and vomiting. Some whiplash patients suffer from blurry vision, cognition deficits, jaw pain, and numbness or tingling in the upper body. In addition to keeping track of all symptoms, car crash victims should keep track of all their financial losses, such as medical expenses, so that an attorney may demand compensation from the responsible party/parties.